We had a blast riding the new Polaris Ranger 400 H.O. this weekend along with our Grizzly, Scrambler and WR250X SuperMoto Bike. We got lots of footage riding the trails and will be rolling those videos out this week!

Had a great time RVing, Frying out, Doing Mud Runs and being with the family. The trails were a bit dusty on Friday but then it rained all of Friday night and the trails were perfect the rest of the weekend :)

We look forward to hearing of your trail and track adventures so please share them here or on facebook! Also don't forget to enter the facebook Helmet Giveaway that ends today. A new $659 Arai Helmet could be yours!

| written by: TEAM DRAGONFIRE |
The long-anticipated Can-Am Commander hasn't even been released to dealerships yet and already DragonFire Racing is developing dozens of new products and accessories for this innovative UTV that has the entire industry craning its collective neck for a peek.

In fact, we’re one of the few companies to get one of these sensational side-by-sides, and we’ve been hard at work coming up with new products for this vehicle for a while now. This gives us ample time to test and design all of the new Can-Am Commander products before the public gets their hands on it. And we have to admit — we’re having a blast!
The 2011 Can-Am Commander lineup, with five models and two engine options, follows through on its promise to bring cutting-edge design, innovation and a focus on convenience, value and usability. This thing is 39 percent more fuel efficient than its class competitor, has more cockpit storage than any other side-by-side, and boasts one of the most powerful engines in the UTV industry.
But somebody’s got to add all the fancy aftermarket equipment, accessories and bells and whistles, and that somebody might as well be us — DragonFire Racing. We have existing DFR products that can be installed on the new Can-Am, as well as a garage full of new products for Can-Am that are immediately available. And by immediately available, we mean you can get them right now.

In addition, our existingDragonFire racing restraints are ready for installation on the new Can-Ams, featuring safety and comfort and our unique H-style that lets you run the belts around the headrest while staying on your shoulders. To see this product, visit this link.
Other products that we’ve developed in the past month that are specially made for the Can-Am Commander lineup include:
Each of the above items is ready to ship today!

Who says American manufacturing is dead?
The start of new ATV production in Newnan is a major step forward in the companies’ long-term strategy to transfer the majority of Yamaha’s worldwide ATV manufacturing to the United States.  When complete, the production transfer could add 200 or more American jobs at Yamaha’s U.S. factory as well as additional jobs at the 125 North American parts supplier companies.  The specific ATV models will be announced on June 8 as part of Yamaha’s worldwide unveiling of select 2012 model year products.
Yamaha’s ATV production transfer, first announced in early 2010, is a long-term strategy that will culminate in bringing the great majority of Yamaha’s worldwide ATV manufacturing to YMMC by 2013.  The company has invested more than $250 million into the factory over the past 10 years creating a state-of-the-art facility and ensuring top quality products are built in a safe and environmentally responsible manner.
“This production transfer shows Yamaha’s commitment to this facility and the U.S. motorsports market – the world’s largest ATV market,” said Henio Arcangeli Jr., Yamaha Motorsports President.  “Manufacturing ATVs in Georgia will allow Yamaha to respond more quickly to its customers’ demands while streamlining its supply chain and distribution processes.  It is a strategic move that will benefit the company, employees, dealer partners and customers as well as the local Newnan community and more than 100 U.S. parts supplier businesses.”
Yamaha held a press conference at its factory in Newnan today where it announced the production transfer news.  Yamaha executives and government officials spoke about the significance of the transfer and Yamaha’s manufacturing facility in the U.S.  The company also unveiled a new “Assembled in U.S.A.” logo to illustrate its pride in U.S. manufacturing.
As one of the largest motorsports companies in the world, Yamaha is a major contributor to the U.S. economy directly employing approximately 2,800 Americans and supporting more than 30,000 additional jobs through its manufacturing facilities, corporate offices, field staff, distribution centers, suppliers and dealer partners.  Overall, Yamaha has corporate offices, regional offices, factories and distribution centers in nine states including Georgia, California, Wisconsin, Texas, Pennsylvania, Tennessee, Illinois, New Jersey and Washington.  The Newnan factory alone spends more than $170 million annually with 137 worldwide suppliers – 125 of which are also based in North America.
This production transfer ensures that Yamaha maintains its loyal workforce in Newnan and will result in the hiring of more U.S. workers in the coming years.  There are 90 positions at YMMC that are directly related to this year’s new production.  The company currently estimates adding up to 200 additional jobs over the next three to five years based on other planned ATV model transfers to YMMC and market forecasts; however, the transfer has the potential to add as many as 800 to 1,000 jobs depending on market conditions.  The factory currently employs more than 1,100 people in Newnan.
“Yamaha’s factory in Newnan is state-of-the-art with more than 20 years experience making a variety of Yamaha products and more than 10 years of producing top quality ATVs,” said Mike Chrzanowski, senior vice president of operations and engineering services at YMMC.  “We here at YMMC are extremely excited about this production transfer to the U.S.  Above all, it is the YMMC employees and their longstanding dedication to the company, their own quality of work, and their communities that has made this transition possible.  With their support, Yamaha is confident we’ll have a smooth transition this summer and over the next few years.”
“Yamaha has been in Newnan for more than 20 years, and we feel very lucky to have such a fine world renowned company in our area,” said Newnan Mayor Keith Brady.  “On behalf of the City of Newnan, I would like to congratulate Yamaha on its ATV production transfer and wish them continued success for the many products they produce.”

Adding a custom bumper to your ride

Adding a new bumper to your ride is one of the easiest ways to set your machine apart from all the rest while also adding additional protection. Many of the after market bumpers mount right where the stock bumper was located making installs a breeze.


If you switch out to aluminum bumpers you will also save some weight and it won't rust like steel does. However, steel is nice because it can absorb an impact and bend without breaking which is not likely the case with aluminum.


Most bumpers make a dramatic difference in appearance like the Rhino shown below. Almost all our bumpers ship free in the USA so if your looking to change the look of your machine, consider replacing your bumpers! 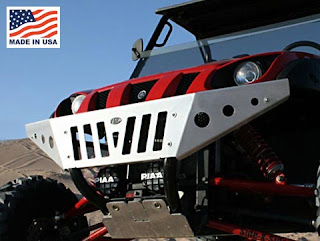 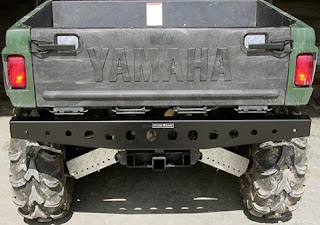 GearUp2Go is giving away a new Arai Monster Energy VX Pro3 Helmet! Sign up today for your chance to win! Drawing is free and will be held on May 31st.

Let us know your thoughts!